Here I am, keeping up with the pack, oblivious to my transmission’s plans to self destruct.
Photo credit: Bill Land

First, the good news: I’m actually faster! I was able to repeat my performance from Roebling the prior month and beat my personal best time by 2.2 seconds at CMP, too! It wasn’t just a fluke.

Getting faster solves so many problems. It makes it easier to manage traffic. It makes racing more fun. It’s kind of the whole point of racing. But getting faster also brings up new problems. It’s harder on equipment. There’s less margin before I hit the limits of the tires. I have to figure out how to get around slower drivers in faster cars.

This event was all about learning what new problems I need to solve. We had 17 Spec Miatas at this event, and both Saturday and Sunday I could have been 12th if it weren’t for these new problems. On Saturday, I clearly had the pace over the car in 12th place, but I made a mistake going around a backmarker BMW E30 and was never able to make up the time I lost. Then, on the second to the second to last  lap of the race, my tires decided they would no longer carry me through the kink at wide open throttle, and I spun off the track, losing another position. On Sunday, I had a better race and was running in 12th place when my transmission blew up. I have the pace to run with the mid-pack, but now I have new problems to solve to get the results I’m after.

That said, I firmly believe that you’re always going to have problems, and the best you can do is choose which problems you want to have. Right now I’m deeply grateful to have the problems of a faster driver!

END_OF_DOCUMENT_TOKEN_TO_BE_REPLACED

My hands are getting faster! Progress!

When I posted the recap of my last event, I was feeling dispirited and frustrated by my lack of progress and my race car breaking. I figured I could either sit around feeling sorry for myself or I could channel my frustration into something productive. I went the productive route and channeled my frustration into lots of simulator practice to see if I could get to the bottom of what was holding my driving back.

I didn’t even know if I’d be running this event until 5 days before we were scheduled to leave. Racing Analytics had to rewire my entire car after they discovered the body wiring harness was damaged because a previous owner had spliced into it and crumpled it up under the dash. They got the work done in plenty of time, but when the car finally started again it had an engine knock that inexplicably went away the next day. This required more work to assess the engine’s health, which was mysteriously totally fine. I picked the car up on a Sunday, and we left for the track the following Friday.

This event had a different format from any of the other NASA-SE events I’d previously raced in. There was another race in a different NASA region going on the same weekend, so fewer racers than normal registered for this event. The officials decided to put all 54 racers that did sign up in one race group, which would have a “qualifying race” and a “points race” each day, making the event a four race weekend for everyone.

My car made it through one practice session, one qualifying session and almost all of one qualifying race before the electrical gremlins returned and ended my weekend. On one of the last laps of Saturday’s qualifying race (which was to set the grid for the points race later that afternoon), my car spun off track, stalled, and refused to refire for the rest of the weekend. Even though I now have two more empty spaces on the points sheet, I was on track long enough to see that my practice paid off, and that I was, in fact, making progress again!

END_OF_DOCUMENT_TOKEN_TO_BE_REPLACED 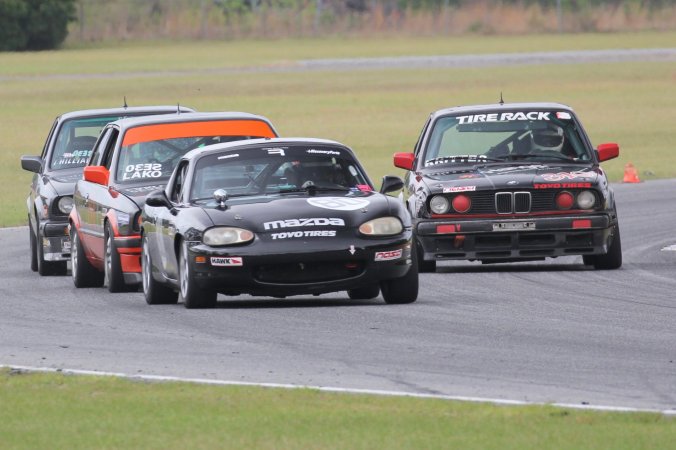 Qualifying before the car died. “What’s a girl gotta do to get a clean lap in around here?!”

Sometimes, bad days make for exciting YouTube videos, like last time I raced at Robeling. This time, bad days made for no video at all. After running about 30 events in two different Miatas, I had a mechanical failure end my weekend for the first time. This is my second “bad day” event at Roebling in a row. Intellectually I’m not superstitious, but emotionally I feel like Roebling is my unlucky race track.