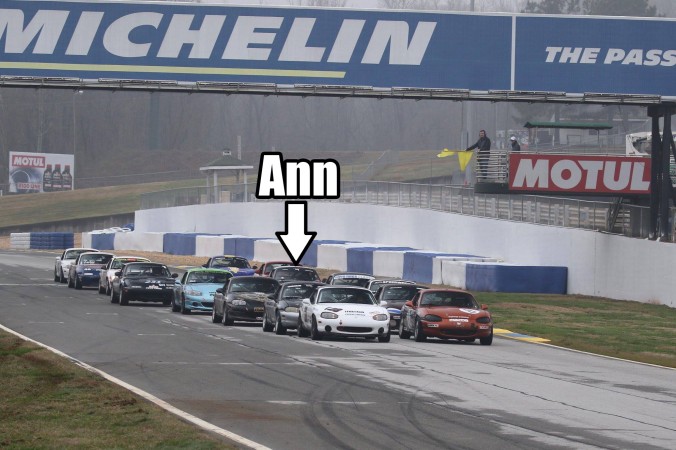 Here I am in the middle of the pack! If only it had kept raining, maybe I would have stayed there.

I’m getting so close to the mid pack now, I can almost taste it. Almost. (I imagine it tastes like a locked up tire smells.) And for a moment at this event, I was there. I qualified 10 out of 15 cars in the rain, but then it dried up before my race and I finished back in 14th. After Saturday’s race I bolted on a new steering wheel spacer I’d picked up at the track, and spent Sunday’s qualifying session adapting to it. It made me faster in Sunday’s race but not quite fast enough to keep up with mid-pack on dry pavement. It’s so frustrating to be so close.

I’m still getting my car back to normal after the big wreck in January, and my car was still a work in progress at this event. I’d picked it up from the body shop with a fresh new right rear quarter panel a few days before the event, but I didn’t have time to lower the ride height back to normal. Racing Analytics had set my ride height way up to keep my right rear tire from rubbing on the damaged bodywork. I didn’t have time to to take the car back to them after getting the bodywork repaired, so I was still racing with an unusually high ride height. That means my car had very little negative camber on the front wheels, which makes it tend to understeer and excessively wear the shoulders of the front tires. It turns out that wasn’t the thing that slowed me down though.

END_OF_DOCUMENT_TOKEN_TO_BE_REPLACED

I was so excited for this race. First, because it was at my favorite track, Road Atlanta.  And second, because it was supposed to rain and I love racing in the rain. Road Atlanta and the rain have something in common for me; they’re both situations where I stack up better against the competition. My driving tends to be limited more by my lack of skill than fear. Rain and Road Atlanta both tend to intimidate other drivers more then they intimidate me, which is an advantage for me.

Brad and I have two sets of rain tires, both of which came with my car when we bought it. One set is 7 years old and hard as rocks, but has like-new tread. The other set is 10 years old and has very worn tread, especially on the shoulders. Up until this point, Brad had been racing on the 10 year old set of rain tires and had been reasonably fast on them. However, coming into this race, Brad was in third place in the championship by one point. He knew the driver in 4th had good rain tires, so Brad ordered a new set… which FedEx then lost en route to our tire shop. Being the good teammate that I am, I asked Brad if he thought I could race and not die on his 10 year old tires. When he replied, “Probably,” I offered to let him race on my rain tires, which are 7 years old, hard as rocks, but have lots of good tread. He agreed.

END_OF_DOCUMENT_TOKEN_TO_BE_REPLACED

Look at me! Mixing it up with the mid pack!

First of all, I have to thank the Racing Analytics crew for all the hard work they did on my car that made this event possible for me. When I left my car with them after my last event, it wouldn’t start due to an electrical problem and it had a mysterious and severe handling issue that we’d just discovered. In just four days, the crew discovered the source of the electrical problem (the O2 sensor wire was touching the exhaust, which caused the ECU fuse to blow) and the handling issue (the front springs were on the rear, and the rear springs were on the front) and fixed both problems! As soon as the crew had the car back together, I loaded it up to take it to Road Atlanta for my next race.

It turns out I’d been racing my car with the springs backwards for the entire year I’d owned it. (The front and rear springs look identical except for a tiny engraving of the weight on each spring, so neither the crew or I had spotted the issue I inherited from the previous owner.) Since I didn’t have any time to practice with the springs on the correct corners before my race, Saturday was all about relearning the car. It was so different, and I quickly discovered I need to unlearn all kinds of weird habits I’d developed trying to keep the previously compromised car from killing me.

By Sunday, I had started to wrap my head around how a Spec Miata was supposed to handle. All of the sudden, the progress that had been eluding me for months began to materialize. Things finally started to click. Instead of searching for tenths of seconds, I started dropping entire seconds off my lap times. I felt more confident than I ever had before. I finally felt, without any doubt, that I belonged on the race track.

END_OF_DOCUMENT_TOKEN_TO_BE_REPLACED

This is an easy way to gain positions.

The week before this race, I watched the Speed Secrets “Improve Your Racecraft” webinar with Ross Bentley. One of Ross’s suggestions in the webinar was to use a “trigger phrase” to get yourself in the right mindset for the race start. (Ross’s is “Watch this!”) When he put it like that it seemed like telling myself, “Let’s see what happens,” which was probably not what Ross was going for. I wracked my brain think of something better. The next day, a t-shirt that I’d bought from an Instagram fundraiser showed up in the mail. It said “Be Epic” across the front. I decided that was perfect.

It turned out to be perfect for this event, too. We had sunshine, pouring rain, mud, and lots of cars spinning across the track (including me) and going off the track (including Brad). In spite of all that, Brad and I both got our best Spec Miata results to date and loaded two happy race cars onto the truck at the end of the weekend. That’s pretty epic, if you ask me.

END_OF_DOCUMENT_TOKEN_TO_BE_REPLACED 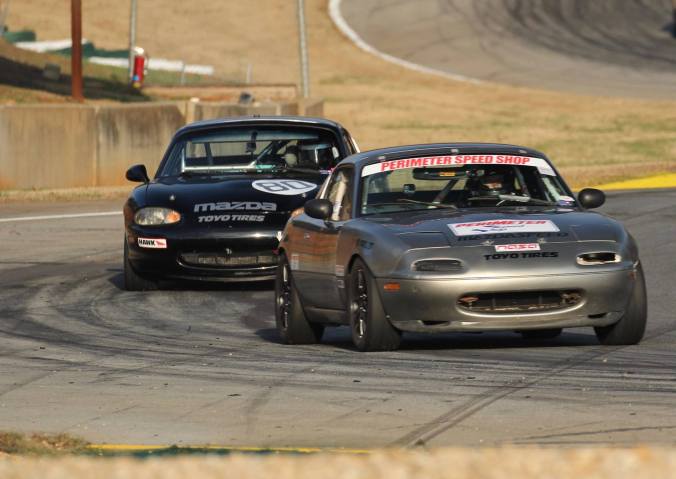 Look at me, actually racing someone!

Road Atlanta is one of the more intimidating tracks in North America. It has big hills, blind turns and tall concrete walls. Being fast at Road Atlanta means keeping your foot flat to the floor when you can’t see the track in front of you. Road Atlanta is also my home track and the track where I’ve turned the most laps. I was nervous about this event, because earlier this year my lap times there had hit a plateau. No matter what I did, I couldn’t get below the 2:00 mark, and that is nowhere near a competitive time in a Spec Miata.