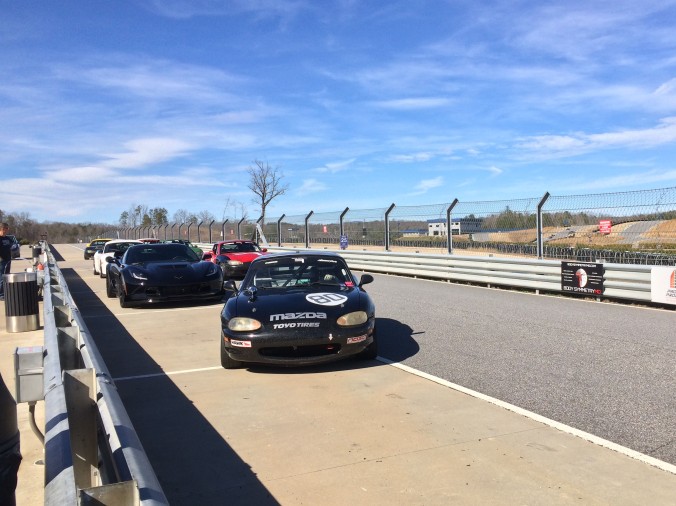 Hanging out with the cool cars at AMP.

Because I’m either crazy or a total badass (or both), I decided to run this race at Atlanta Motorsports Park (AMP) the very next weekend after my race at CMP. To tip the scales a bit to the crazy side, this event was on a Sunday and I had hardwood flooring installers scheduled to by at my house at 8:00 am the next day to start installing new floors in my whole second floor. This meant I spent the day before the race moving three bedrooms’ worth of stuff downstairs to clear the way for the new floors. But Brad and I needed to make a trip to AMP that weekend anyway, because we needed to drop Brad’s race car off at Racing Analytics (whose shop is at the track) to diagnose the mysterious misfire that developed at our last event. Why not get a few races in while there?

Fortunately, this one-day event was pretty easy to squeeze into my schedule. AMP organizes this really handy race series for Spec Miatas and other momentum cars with a manageable schedule and lots of track time. The day starts at 9:00 a.m., (which is super late compared to most amateur race series) and includes a practice session, two qualifying practice sessions and two races and is all wrapped up by 3:00 p.m. I’m planning to squeeze in as many of these AMP races as I can manage this year.

Even though my results were pretty “meh” and I was sore the next day, I was glad I made it out to this event. First of all, the sun came out for the first time in over a week, and there’s no place I’d rather enjoy the sunshine than on a race track. Secondly, even though I didn’t see big improvements in my results, I did have a few small glimmers of greatness and I think I’m finally starting to see the light at the end of the “back of the pack” tunnel. My first several races had just been about learning to survive in wheel to wheel racing and finishing not-last was a bonus. But after running these two events in quick succession, I was starting to see a way forward. I was now seeing a few times when I could choose to do things differently that might improve my results. I’m beginning to feel some confidence that next time I could stay in the throttle longer here or let the car move around more there. My brain is starting to speed up and little bits of order are glimmering through the chaos.

Once again, my coach helped me make my plan for this event. The items on my agenda were similar to my last race.

Try different approaches to braking. The idea was to experiment and see what type of brake application would help the car carry more speed through the corner and allow me to get back on the throttle sooner. For example, would moving my braking into the turn and trail braking help the car turn, or would I be better off finishing my braking before corner entry, so the car would be more level and balanced?

Spend 3% more time at full throttle. Like last time, we wouldn’t officially measure this with data, but it was a goal I should try to achieve by moving my brake zone into turns, getting back to the throttle earlier and getting to full throttle between turns. A wide open race car is a happy race car!

Enjoy the day and have fun. My coach added this into the plan for me, and I was glad he did. I can get so wrapped up in trying to improve my performance that I forget this is my hobby and I do it for fun. Just the fact that I get to take my very own race car out and drive it as fast as I possibly I can once or twice a month (including winter months like February!) is pretty amazing, and I should definitely make a point to enjoy that.

Got an awesome start in the second race. This was definitely my biggest accomplishment and the “glimmer of greatness” I mentioned earlier. The second race was gridded in the finishing order from the first race. This meant there were two cars with faster lap times (a lot faster, like 6 seconds a lap faster) gridded behind me. And yet, I got out in front of those two cars on the start, and caught the one gridded in front of me, too! It took almost a whole lap for all of the faster cars to get by me. Looking back at this start, I’m beginning to think, “If I can run with those cars at the start, why can’t I run with them the rest of the race, too? I must have it in me somewhere…”

Ran a new personal best lap time. It was only about a half second faster, but faster is faster, right? I will take any progress I can get.

Enjoyed a beautiful day at the track. I had really wanted to see more improvements in my pace, but, because “relax and have fun” was on my plan for the day, I was able to let it go and just enjoy myself. I’m really glad I got out of my own head and enjoyed the 65F and sunny weather. (As a former Minnesotan, warm sunny days in the winter will never not be special.)  Remarkably, once we loaded up and headed home, it clouded up again and stayed that way for the following week. The skies cleared up just for my race!

I won’t go faster until I get back to the throttle before the car is settled. Since one of my goals for the day was to spend more time at full throttle, I tried all kinds of things to help me get back to the throttle more quickly when exiting a turn. I tried braking differently, different lines and using different gears, but my lap times stayed about the same no matter what I did. Later that evening, I showed Brad my videos and he said, “You’re waiting until the car is completely settled before you accelerate.” I sent the videos to my coach, and he concurred. I seemed to have discovered a ceiling: a perfectly settled Spec Miata will only do a 1:45 around Atlanta Motorsports Park no matter what you do. (Meanwhile, the rest of the pack was running lap times between 1:39 and 1:36.) Although it’s easier said than done, the solution is obvious – accelerate even if the car isn’t quite settled yet. Sometimes adding throttle will settle the car, or as Brad put it, “It’s okay if the car moves around a little!”

There are lots of reasons a race car can vibrate and they all kind of feel the same. My car had started to vibrate at the end of my last race the previous weekend at CMP. I was fairly certain this was because I’d flat spotted a tire when I spun on the damp, abrasive race track. I didn’t have time to unload the car between races, and due to circumstances outside my control, I didn’t have time to check the tires when I unloaded the car at the track that morning, either. Just like in my last race, my car vibrated at high speeds, which was a little unsettling through the 100+ mph kink on to the front straight, but didn’t slow me down. In addition to this, my car vibrates in the brake zones at AMP because there are braking bumps in the pavement. To me, this felt like vibration down the fast front straight and then continued vibration in the hard turn 1 brake zone. On the last lap of my first race, I was braking over some bumps about half way through the lap and my left front tire made a very small squeak as it rolled over a bump. After that, my car started pulling hard to the right under braking and became much less willing to make right turns. I finished the race and took the cool down lap wondering what had broken in my car. As soon as I got out of my car in the paddock, I saw the issue. My left front tire was completely flat. When I pulled it off, I saw that it was flat spotted all the way through. I had been locking that wheel up under braking and didn’t even feel it with all of the other vibrations going on!

I put another tire on the car before my next race, and when I went through the high speed kink again, my car still vibrated. Except, now that I had four perfectly round tries on my car, I could tell that the vibrations were because the pavement in the kink was bumpy. Those bumps were new since I’d run the track last, and I had totally missed them with all the flat spot vibrations going on.

What a flat race tire feels like. All the flat tires I’ve previously had in my life have been on street cars, specifically street cars that had tires with big squishy sidewalls. These tires had that distinctive “thump thump thump” feeling when they were flat. Because a race tire has a stiffer sidewall, and race cars are overall stiffer cars, the flat tire I had on track didn’t feel anything like my flat street car tires. But it definitely felt like something, and next time I’ll recognize it and won’t keep driving around the track on a flat tire!

What to work on for next time

Getting comfortable with the car moving around under me. It’s obvious to me now that this is currently the biggest thing holding me back. As my coach puts it, I’m “too tidy.” This is definitely a mental road block for me, and I’m still figuring out how to overcome it. I think I’ll start with finding time to practice on iRacing’s dirt tracks, and maybe look for a chance to spend some time on a skid pad.

Mentally practice overdriving this track. Part of my discomfort with pushing the car at this event was my discomfort with the track itself. It’s the track I’ve spent the least amount of time on, and it’s a tight, technical track with steel armco barriers that feel very close. I still have a hard time distinguishing “the car moving around a little” from “risky overdriving,” and when in doubt I tend to err on the side of not crashing. I used to feel this way about the intimidating concrete walls at Road Atlanta, but I spent time overdriving the track in the simulator. That helped me understand how the car behaved around that track when I pushed it, and when pushing the car resulted in a crash and when it didn’t. AMP isn’t in my simulator, but I probably have enough knowledge of my car and the track to mentally do this exercise and imagine how I getting on the throttle before the car is settled would play out. I plan to take time to think through all this before my next race here.