Many large racing organizations require you to have a competition license to race with them. NASA competition licenses are earned by attending a “competition license school” event, which is really more of a “prove yourself worthy” event than a “school.” The full day event is designed to stress and exhaust comp school students and concludes with a “mock race.”  The idea is to demonstrate that not only are the students safe and competent racers, but that they’re safe and competent races when they’re so hot and exhausted they can barely remember their own names. 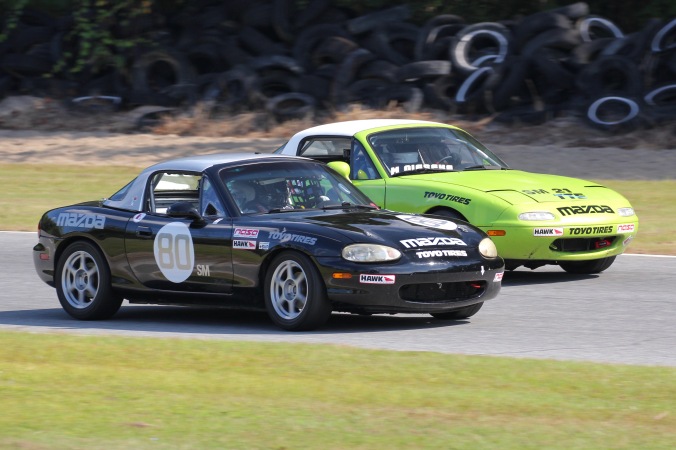 It’s my understanding that each NASA region runs its comp school a little differently, but they all feature a schedule of back to back classroom and track sessions with an exam thrown in somewhere and “mock race” or two at the end of the day. The schedule is so tight that comp school students are encouraged to bring a support person to make sure they get food and water and there’s gas in their race cars. Comp school students are required to not spin or go “four off” (all four tires off the pavement) and obey the flags, all while being fast enough to be safe in a race.

Relax and just drive. Comp school is built up to be a daunting and difficult experience, but I had supported Brad during his comp school a year and a half ago, so I knew what to expect and I knew I was good enough. I didn’t need to try or push because I knew I could drive my 8/10ths and that would be satisfactory. My attitude was that I might learn something in comp school, but that I didn’t need to learn anything, because I already have what it takes to go racing. Heck, I’d already been racing!

Dig in and power through it. I expected to feel tired and stressed because the day is designed to make you feel tired and stressed. I prepared myself to keep a positive attitude and reminded myself of all the work projects and home remodeling that I’d powered through in the past.  I knew comp school wouldn’t be worse than, say, stripping asbestos flooring while suffering from shingles in your nose, for example.

I passed! It was a brutally hot and humid mid-September day in Savannah, with burning sun and temps in the upper 80s. From 8:30 am to 6:00 pm I spent a total of three hours on track and five in a classroom. By the last mock race of the day, I was having a hard time getting my car into fourth gear and was so hot and tired I couldn’t tell if it was me or the car. (It was me.) But I kept my car on the track, got faster with each on track drill, and knew all the answers to all the questions in the classroom.

I got faster throughout the day. Several of the sessions on track were “side by side drills” where drivers partnered up and drove around the whole track side by side, taking turns passing each other. My partner had competed in time trials for two years already, so he was more experienced and faster then me. All day, he kept pushing me, driving a little faster each lap and challenging me to keep up. The challenge was fun and engaging, which kept me focused on a long, hot day.

My people pleasing, rule following personality traits don’t have to work against me. I have sometimes felt like I’m too nice to be good at racing. I don’t want to bother anyone or get into trouble. In one of the on track sessions during comp school, I trailed my brakes a little too deep into a turn and the back end of my car started to slide out. I knew I wasn’t allowed to spin off the track, and my brain went right into a “follow the rules” mode I’d developed in iRacing, which penalizes players for driving off the track. I instinctively made a correction to keep the car on the track, using my inner drive to follow the rules. I had taught my inner goodie-two-shoes to catch oversteer!

Hard work pays off. Intellectually, I’m aware that hard work pays off, otherwise I wouldn’t have put in the hard work to get to comp school in the first place. But there was something about working hard and experiencing success that enabled me to believe in the power of effort on a deeper level. Learning to drive a race car was the first time in my life I’d challenged myself to do something I wasn’t naturally good at. I had to put in the work and see the results before I really believed it was even possible to get good at something without the boost of starting off with natural aptitude.

There were very few times where my performance was officially measured or assessed during my climb up NASA’s HPDE ladder, so it was sometimes difficult for me to believe that I was really getting better. Comp school is all about assessment, though. Getting that piece of paper anointing me an official race car driver made the results of my effort feel real. I had earned myself that special kind of confidence that can’t be built up by encouragement or outside influences, but is earned only through putting in hard work to achieve a difficult goal. I’ll never look at my abilities and capacity for growth the same way again.