My first NASA-SE race weekend was a baptism by fire. It was nearly 90 degrees and steamy, living up to the event name. Roebling is a deceptively technical track where I’ve never felt particularly confident. There were 50 cars in 5 different classes, racing all at once on the small, two mile track. It was intense. And it was wonderful. 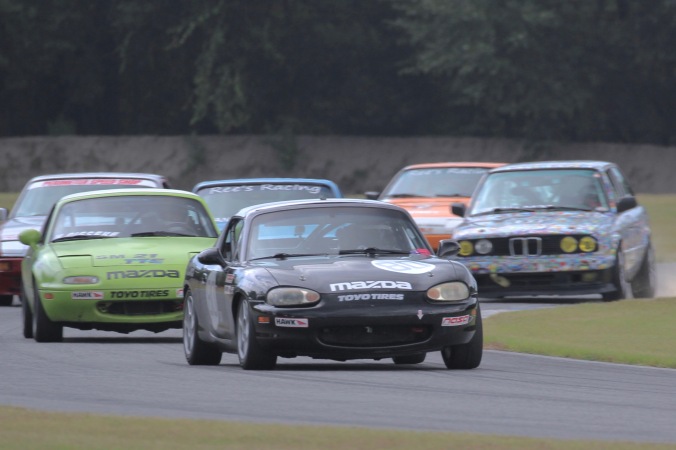 Brad and I had a lot of new equipment for this event, and, per usual with new equipment, some of it worked and some of it didn’t. One of the things that didn’t work was the fifth gear in Brad’s new Spec Miata. Brad discovered this when he ran the comp school mock race with me the previous day. Not wanting to do further damage to the transmission for what would surely be a poor result, Brad opted not to race for the rest of weekend.  Instead, he became my crew chief, helping me with my car and and being on the radio for me. I deeply appreciated the extra help while trying to get my bearings, but we were both really disappointing Brad wouldn’t be able to run at Roebling Road, a track where he’s always been very competitive.

I had some trouble with my car mysteriously stalling in my Sunday race. The issue had started on Friday during comp school, but I was so hot and exhausted I wasn’t sure if it was me or the car. Turns out it was the car. My car lost power and stalled when I downshifted to third gear, but only in one particular turn. Fortunately a standing yellow flag came out in that turn – meaning I couldn’t be passed there – so I was able to avoid the problem by staying in fourth gear without losing much ground.

Run two clean races on my provisional race license. NASA requires rookies to run four races on a provisional license in the issuing region without incident (crashing, contact with another car, violating a flag, etc.).  Only then are you issued a “hard card” racing license, which is good in all NASA regions and honored by many other racing organizations. Getting two clean provisional races checked off was my top priority.

Enjoy the thrill of racing. I’d been driven to this day in pursuit of a certain feeling. That thrill of trying to drive as fast as I can, with competitors to measure up against. I wanted to get out on track and push and hunt for the limit and just enjoy being a part of it all.

Claim the racing line. I added this third intention for Sunday’s race after reviewing my in-car video of Saturday’s race with Brad. “You don’t have to keep moving over for other cars like that,” he told me. “You’ll go faster if you don’t, and then fewer cars will catch you.” He was right. On Saturday, after I had lost sight of the rest of the Spec Miata pack, I started pulling over for out of class cars and the faster Spec Miatas that lapped me. I had experienced this vicious cycle in HPDE before. Letting other cars by slows you down. Then more cars catch you and you let those cars by, too.  Before you know it, you’re way off pace and in traffic all the time. On Sunday, I resolved to stop babysitting the cars behind me. This is racing, and if other drivers are stuck behind me, it’s their job to figure out how to pass me.

I finished two clean races! I survived and wasn’t last both days. And I had a ton of fun while I was at it. In both races, I found some other lappers to race with as the fields spread out. I was really doing it! I was out there racing! I proved to myself that I have what it takes to be a race car driver. I earned that bulletproof type of confidence that only comes from working hard to achieve something very difficult.

I got faster. Our race director, Jim Pantas, always says, “No matter what, you go two seconds a lap faster when you start racing,” and I was no exception. The competition drives all racers to find more within themselves. In Saturday qualifying, I beat my personal best lap time by two seconds. I had Brad on the radio, and he made the call, “Clear track behind you. Push hard and make this lap count!” And I did. I told myself to relax and feel the tires, and carry a little bit more speed through each turn than I thought was possible. “Keep searching for that limit!” I coached myself. I felt the thrill of searching for speed and teaching myself how much more I was capable of. Sunday I went out and pushed that same way, continuing to lean deeper into the capabilities of the racing slicks.  I knocked another half second off my personal best lap time. On Sunday I qualified in not-last place, which was a major victory for a rookie who has always struggled to find pace.

I improved my race pace. On Sunday, I focused on not only surviving the race without incident, but also on improving my race pace by not slowing down to let other cars pass me. Claiming the line was hard! It takes mental and physical effort to maintain a faster pace and figure out where to put your car in order to signal to the cars behind you, “I’m here! You’re going to have to find another way by me!” I felt like a huge jerk, but I went faster and got lapped less. When Brad watched my in car video from Sunday, he confirmed I had improved on calming the line, but didn’t agree that I was being a jerk. “I wouldn’t call your driving conciliatory,” he said, “but you’re still being very courteous. You’re going to have to feel like a lot more of a jerk before you’re actually driving like a jerk.”

I learned soooo much racing in my first multi-class NASA race, it’s hard to get it all down.

Hand signals are important. They’re also used differently than in HPDE. For example, a wave means, “Alert!” not, “Hello, friend!” or “Thanks for the point-by!” In racing, a wave means things like, “Stop bump drafting me!” and “Yellow flag, don’t pass,” and “My car just broke, don’t hit me!” In racing, a thumbs up is used to thank another driver for a bump or point by. I also learned drivers use hand signals a lot more in racing than in HPDE. Brad put it best when he advised me, “Like in relationships, things go a lot better in racing when you communicate well.”

Make a plan for checking your mirrors.  In these first two races, I struggled to find a balance between focusing forward to try to go as fast as possible and watching my mirrors for cars lapping past me. I hate to say it, but I got surprised by a couple of cars in these first two races because I was focused forward so intently. (One of them came up behind me on a straight with two wheels in the grass and traded a little paint with me. That’s not my fault, but I’d prefer to be aware of other drivers pulling crazy stunts like that.) In retrospect, I should have made a plan for when I would check my mirrors for faster traffic and when I would focus forward. I’m no longer running with significantly faster cars, like I did in the HPDE 4 practice sessions, so cars will catch me more slowly and it should be easier to keep track of them.

Short shift before getting bump drafted. Otherwise, if you shift as you’re getting bumped, you’ll get bumped a lot harder than you expected. The extra speed you get from the bump will more than make up for shifting a few hundred RPMs early.

What to work on for next time

Get a blind spot mirror. The other Spec Miata rookies and I were all surprised by how bad the blind spot on the left side of the car is. Because there is so little room between your helmet and the roof of the car, you can’t see anything in the mirror behind your head. Combined with the window net covering the driver’s window, it’s nearly impossible to see anything coming up behind you on the left. I need to find some veteran Spec Miata lappers and find out what kind of blind spot mirror they run. I feel like I either need a backup camera or a periscope!

Make some checklists. Race cars involve checking, plugging in, and turning  on way more more stuff than an HPDE car. For example, my radio needs to be turned on and plugged into about four different places to work, and that’s just one of many components that’s new to me. I don’t have all these pre-race and post-race habits formed yet, so I’m going to make some checklists to tape in visible places.

Find strategies for not feeling like a jerk in traffic. When I’m being lapped or caught by out of class cars, I feel like a jerk when I don’t move out of their way. I need to convince my inner Nice Girl that it’s okay to hold the line. No one likes a slow, hesitant lapper, do they? Isn’t it better to be a confident, predictable lapper who other drivers are comfortable passing off line? Assertive lappers are nice lappers! Or something like that…

Enjoy being on the steep part of the learning curve again. Now that I’m doing multi-class wheel to wheel racing, I’m starting from the bottom again. I’m at the back of the pack and I have everything to learn. I’m hungry, and I want to find my way to the front of the field.  Sometimes I feel too impatient to get there. But I also know I’ll make progress quickly while I’m on this part of the learning curve, and racing, unlike HPDE, gives me so many objective ways to measure my progress. I want to appreciate making that progress. I have already made it here from nothing and proved to myself that I am capable of making great improvements. Now that I’ve freed myself from doubting my own capabilities, I want to enjoy the journey!